Snow and the EZ Ration Processor

Growing up in a ranching community in Southern Colorado, I remember everyone saving winter grass for their cattle because it was the cheapest way to winter them. Grass with some protein supplement, usually cake, was what everyone fed their cattle through the winter. However, everyone knew there would be times that snow would cover up the grass and they would have to feed hay. The big question was how many days will it be covered up and how much hay will be needed.

It was a guess and virtually no one ever guessed right.

The concept behind the development of the EZ Ration Processor is to be able to feed the cattle a total ration cheap enough that you do not need to rely on grass through the winter months (if not covered up most grasses are still at their lowest nutritional value during the winter months). By using all of your grass during the growing season, it will allow you to run considerably more cattle , as well as better utilizing the grass because it is in it’s highest nutritional state.

Being able to process and blend hays with the EZ Ration Processor can cut feed cost by up to 50% and even more in some cases. When utilizing an EZ Ration Processor, producers can bring their cattle in closer to the stack lot where they are easier to take care of. They would know exactly how much hay they need and be set up to feed the cattle quickly and efficiently.

This was a viable concept for the last decade even though we had open winters because producers could run enough more cattle and feed them a total ration efficiently enough that the bottom line was increased substantially over the old cake and grass method. If we are heading into a wet decade, the EZ Ration Processor may become the answer to surviving through bad, snowy winters, while still increasing the bottom line at the same time. 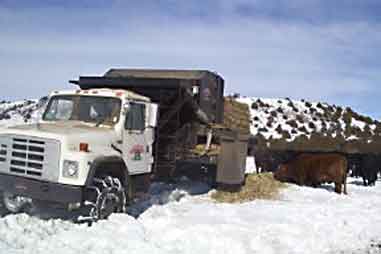